skip to main | skip to sidebar

Ok I took "Oh snap" down due to a good friends concern, "Thankyou for being a friend". This was a poem we as barkeepers/bartenders, customers and humans can relate to. Everyone at one time or another walks into to a bar alone and in need of interaction. My job as a bartender is to look after those needs. Everyone has this customer in there bar from time to time, I know they are a pain in the arse but aren't we all.


He is harmless
He sits at the bar
Questioning at first
What’s this, what’s that?

He is harmless,
He’s killing time
It’s another lonely day

I offer him my smile
My company for awhile

He's harmless
Just lost in his drink
Confused and befuddled

I listen and talk
Second guessing his needs

He's harmless
I try to push his pessimism aside,
Replacing it with a laugh and a smile

He's harmless
I say my goodbyes and I know it won't
Be long, till he is back…
Posted by Hayden Scott Lambert at Sunday, September 20, 2009 No comments:

Hello everyone, well I have just finished another Saturday night and wow I’m feeling those aches and pains!Every single joint hurts and I have some kind of inflammation on my fingers which is itchy as all hell...
My motivation for this poem is pretty straight forward, I’m sure there are a lot of bartenders out there who could have been something else. Me I would have ended up as a builder like my father and when I go back to NZ, I do trade my shakers in for a nail gun and hammer... Oh and a cool apron with nails and stuff. I mean there are plenty of jobs out there that don't require skill, determination, intellect, patience, understanding and of course making a great cocktail. So here is my poem to all the girls and guys who have a passion for bartending. We all know how it feels to put our bodies on the line night after night! Please feel free to comment on what you might have been! I know Dave Wonderich would have made a great rock star and Robert Hess wants to be a bartender (Microsoft must pay badly)

My hands creek as they shake back and forth
My back is bent as I lean forward to pour
My fingers ache, freezing and frostbitten

I’m not an Antarctic explorer, I’m not a mountain climber
I’m a bartender, entertainer and drink maker

My body is weary, tired of fast movements
My head is heavy from too many conversations
My legs feel like they are cast in lead

I’m not a rocket scientist or a microsoft engineer
I’m your local bartender, listener and drink maker

My toes are cramped in shiny black shoes
My shoulders are locked from one too many hard shakes
My eyes are strained, make that double strained

I’m not a lawyer, school teacher or a doctor
I am the law, the teacher and I am the drink maker

So recently I entered myself into the Belfast heat of the 42Below Vodka world cup. I didn't expect to win  although I thought alot of cash would help! I was sitting there in anticipation third was called out, then 2nd and then finally Ben Carlotto said "The winner is the big guy in the corner". Well for the people who don't know me im not very tall, my bum nearly touches the ground and I am heavy-set. I wish he had of just called out my name, anyways I digress this poem is about my winning drink the Catch 42. I was playing on the dilema set in the book Catch 22 written by Joseph Heller. It is a dilema that I face alot!

42Below you make me blue, Aotearoa im lost without you
Each passing day makes me sad, life with you wasn't all that bad
Minutes and days pass, colliding and crashing into months and years
I fear that, I can never return as me, they want that person I'll never ever be

It's all the things I want, yet none of the things I need,
It's a no win situation,a catch 22,
42Below you make me feel blue,
The longing for a home,a place to rest my weary head.
To feel my feet on Plimmerton beach,
To teach my children how to surf,
To run wild and free and play amongst the trees

No more two up, two down,cramped living spaces aren't for me,
No more noisy neighbours, gangs of bhoys standing,
menacing on street corners
No more craic, burnt out cars and joyriders

42Below you make me feel blue,
You have made me look deep into a place
I put out of reach, my home, my house, my beach my needs,
That burning flame that was almost dead has
Rekindled itself inside my head,
Here I come, a kiwi bhoy bound for home! 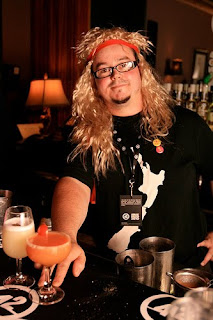 Posted by Hayden Scott Lambert at Saturday, September 05, 2009 No comments:

A bumper of good liquor

I have a small amount of old cocktail books which I skim through on a regular basis. In the books there is a trend to put quotes and small poems which in some way relate to drink. So on this post Im going to cover just a few of them. Ok so ages back I posted these to my facebook group. I thought it might be interesting as I know all you cocktail geeks out there would have come across a few of them from time to time! Most of the poems are selected at random from books by Ted Sauciers "Bottoms Up", Charles H Barker Jr "The Gentlemans Companion",Stanley Crisby Arthur "New Orleans Drinks And How To Mix Them", Anton Massel and Hugh Barty-King  "Rum, Yesterday and Today",
I have some new ones which I have added from a new batch of cocktail books I bought from Greg at Cocktail Kingdom
A bumper of good liquor
Will end a contest quicker
Then justice, judge or vicar.
Richard Brainsley Sheridan

Ah, brief is Life,
Love's short and sweet way,
With dreaming rife,
And then -Good day!

Shake or stir it, long or short
With sugar,lemon, spice
Toddy, grog or planters punch
With bitters, juice and ice

Mix it hot or mix it cold,
And shake till kingdom come,
What makes the mix distinctive
Is being made with rum!
Unkown


"From fam'd Barbadoes on the western Main
Fetch sugar, ounces four-fetch Sack from Spain,
A pint,-and from the Eastern Indian Coast
Nutmeg, the glory of our notheren Toast:
O'er flaming Coals let them tougher the heat
Till the all-conquering Sack dissolves the sweet;
O'er such another Fire put Eggs, just ten,
New-Born from tread of Cock and Rump of hen:
Stir them with a steady hand and conscience Pricking
To see the untimely end of ten fine Chicken;
From shining shelf take down the brazen skillet,-
A quart of milk from a gentle cow will fill it.
When boiled and cold, put milk and Sack to Egg;
Unite them firmly like the Triple league,
And on the fire let them together dwell
Till Miss sing twice-'You must not kiss and tell,-'
Each Lad and Lass take up a silver spoon,
And fall on fiercely like a starved Dragoon."
Kitchiner

I found some great poems and they grace the pages of "The worlds drinks and how to mix them" Bill Boothby 1908. They apear under the chapter "Witty, wise and otherwise"

The profession of mixolgy
is and art that's being lost
That's why this treatise is published,
Quite regardless of the cost.
Regardless, too, of other things,
For facts one cannot smother;
But what is the gospel truth to one
Seems hot air to another.
There'll rise occasions every day
When it'll be up to you
To persue the pages of this work
And find things that you should do

IF YOUR CHRISTIAN NAME IS COHEN.

If you don't drink or care to smoke,
Or eat free lunch and pickles;
And some old friend is treating you,
Why!  Just take a glass of nickles.
James Montgomery Flagg
I'm not sure if this is two separate poems, this is how it reads in Cocktail Bill's book

Friend of my soul, this goblet sip,
'Twill chase a pensive tear,
'Tis not as sweet as women's lip
But oh! 'tis more sincere;
Like her, elusive dream,
'Twill steal away the mind,
But unlike affection's dream
It leaves no sting behind.
Unknown


There is something about a Martini,
A tingle remarkably pleasant;
A yellow, a mellow Martini;
I wish that I had one at present.
There is something about a Martini,
Ere the dining and dancing begin,
And to tell you the truth,
It is not the vermouth--
I think that perhaps it's the gin.
Ogden Nash
Posted by Hayden Scott Lambert at Thursday, September 03, 2009 3 comments:

Hayden Scott Lambert
My name is Hayden or if you know me well enough "Hayds". For the last four plus years I have been working in a little hotel bar in Belfast, Northern Ireland.